Kobe, The One Who Started It All 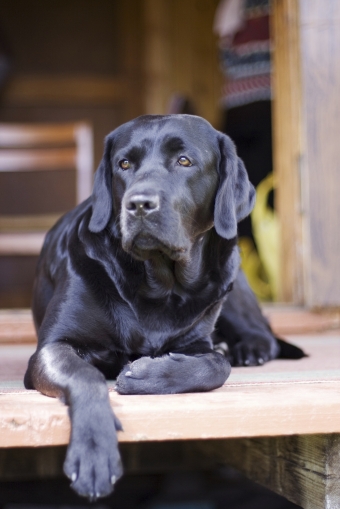 Sitting in silence beside Kobe on the cool porch floor was unlike any experience I had ever had with a dog.

There was no wagging tail, no rolling over for a belly rub, no shifting of the eyes to look up at me, not even the slightest twitch of the nose to take in my scent. Nothing.

In fact, it was so strangely quiet and still that I began to desperately send silent messages in hopes of any form of connection. "Hello Kobe? Are you here?" Nothing.

It had been 5 days since Kobe had even attempted to move from his blanket on the porch. His veterinarian had graciously come to see him on the day he had collapsed and began to vomit.

Karen explained to the vet that she noticed Kobe's eyes darting back and forth before he fell to the ground.

After careful examination Kobe was diagnosed with Peripheral Vestibular Syndrome (inflammation of the inner ear, similar to Vertigo in humans)

The vet checked in on Kobe over the next few days, applying anti-nausea medication and catheterizing him as he was unable to pee on his own.

I received the desperate phone call on day 5.

Karen was exhausted and scared. She was grasping for anything, anyone, to help her long-time faithful friend recover from this devastating set-back.

Kobe was clearly is crisis. I knew that whatever I was about to do needed to be extraordinarily  gentle, yet powerful enough to re-set his nervous system.

It was in this moment, on the cool porch floor beside an incredible black Lab named Kobe, that Response5 came to be.

When I left Kobe's side an hour later he still hadn't moved. Not a twitch. Not a sigh. Nothing.

...but several hours later my phone rang. "He's up! We just walked around the garden together, and he peed!" Karen's excitement said it all. " Thank you, OMG, Thank you! I don't know what the hell you did, but Thank you!"

It's crazy and wonderful, this thing called Response5. It changes lives! Learn more about how Response5 works, or get started today!