Lhasa Poo with neck and back pain 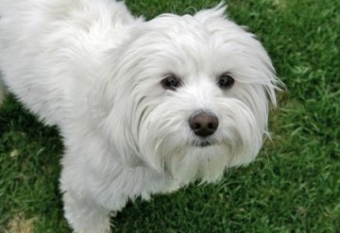 One of the great things about Response5 is that it's not just for your own dog! As I learned in the Response5 Class, you can use it on any dog, any animal really,( I've even used Response5 on an Iguana!, but thats a whole other story) as long as you have permission from the family to do so.

Chloe was one of those times where my skills were more than welcomed!

Chloe is a 10 year old Lhasa Poo who was experiencing recent neck and back pain. She had an MRI and a spinal tap done but a diagnosis was not provided.

She was currently on restricted activity, pain medication and weight reduction. Chloe had a herniated disc two years previous and was not able to roll over onto her back any longer. She also had double knee surgery 4 years ago.

I did Response5 on Chloe.

The next day I received an email from her "Mom" stating Chloe had slept throughout the night and was full of beans that morning! In fact, Chloe insisted on walking further than her normal restricted short walk.

The following week I visited with Chloe again. After our second session of Response5 I received this email:

Chloe was just laying on her back! She hasn't done that for a longtime! I think that's a good sign!

Chloe continued to improve with Response5 and is back to her normal walking schedule and best of all, she's rolling onto her back on a regular basis!